Alberto Burri (March 12, 1915 - February 15, 1995), was an Italian abstract painter and sculptor.
Burri was born in Città di Castello, earned a medical degree in 1940 from the University of Perugia and was a military physician during World War II. After his unit was captured in Tunisia, he was interned in Camp Howze prisoner-of-war camp in Gainesville, Texas in 1944, where he began to paint. After his release in 1946, Burri moved to Rome; his first solo show was at the Galleria La Margherita in 1947.
Burri soon turned to abstraction and unorthodox materials, making collages with pumice, tar, and burlap, and started a series of canvases that bulged into the 3rd dimension. His work is related to European Tachisme, American Abstract expressionism, and Lyrical Abstraction. In the mid-1950s, Burri began producing charred wood and burlap works, then welded iron sheets. In the early 1960s he was burning plastic, and in the early 1970s started his "cracked" paintings, or cretti. He created a series of works in the industrial material, Cellotex, from 1979 through the 1990s.
In the 1980s, Burri created a form of land art project on the town of Gibellina in Sicily. The town was abandoned following an earthquake in 1968, with the inhabitants being rehoused in a newly built town 18 km away. Burri covered most of the old town, an area roughly 300 metres by 400 metres, with white concrete. He called this the Grande Cretto.
Burri was awarded the Italian Order of Merit in 1994. He died, aged 79, in Nice, France. His birthplace of Città di Castello has memorialized him with a large permanent museum of his works. 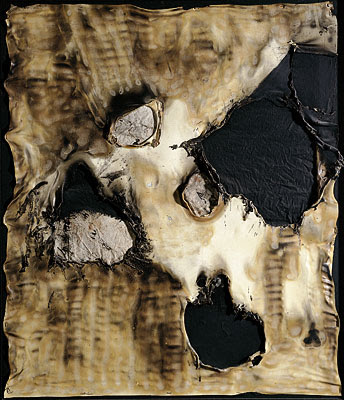